A Spotlight on Rotational Viscometers

You probably know that rotational viscometers work by measuring the torque on a vertical shaft that rotates a spindle.  The spindle is in the test sample and its rotation is impeded in proportion to the viscosity of the sample. These instruments measure viscosity.

These systems use sets of calibrated springs. Manufacturers using the spring system offer three to four spring ranges. Each range is related to a span of viscosity. Three to four individual instruments are needed to cover the standard range of viscosity (1 cps to over 100,000,000 cps).

A spring viscometer system is based on a pivot and spring concept. A pivot/spring assembly rotates on the shaft. The spindle is attached to this assembly. As the spindle rotates, the drag of the fluid against the spindle causes the spring to deflect. This deflection is proportional to the torque caused by the viscosity of the sample. This relationship to viscosity is calculated automatically.

The spring system provides high measurement accuracy, particularly in the low viscosity ranges. This advantage is offset by the limited measuring range of any single spring/pivot set or instrument.

Because it is a somewhat delicate system based on a spring structure, special care is needed to protect it from undesirable influences and damage. Further, as with all spring systems, calibration needs to be checked and adjusted frequently.

A second system for getting at the torque is sometimes known as the servo system. This uses a precision servo motor to drive the shaft. The spindle is attached directly to the shaft instead of a pivot, as with the spring system.

The current is an indirect measure of the torque, but it is proportional to the viscosity.

Because there is some additional friction in the servo systems, the accuracy for slow speeds and lower viscosity is less than for spring systems.

We have found that there is a significant difference between the basic measuring systems of rotational viscometers.  Your next thought is, doubtless, “So what? Why should I care?”

As with most measuring systems each of these types come with an array of options such as touch screens, programmable tests, data management and automatic test control. These options are not part of this narrative.

Rather, financial and operational consideration of the basic and frequently unnoticed different torque measuring systems are germane to intelligent viscometer model selection.

The difference between the two measurement systems (spring and servo) has implications on operational factors such as the level of attention needed for calibration checking, recalibration effort and record keeping activities.

We hope that this discourse on the differences between viscometer torque measuring system brings some aid in the evaluation of rotational viscometer models.

As we continually prove to ourselves. What first appears as simple instrument questions leads to intricate answers.

Hope this was helpful. Please share this message with colleagues who work with viscosity.

P.S. Did you know that you can subscribe to these exposés, rants, raves and ramblings? All you have to do is enter your email address into the box just to the right of the title.

P.P.S.  Check out a couple of Vicsometers. 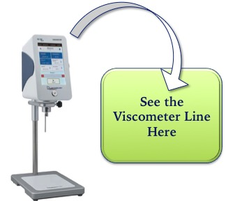