Who's Concerned About Sieve Shakers?

The primary purpose of a sieve shaker is to provide motion to a sample in a test sieve.

that presents all the particles to all of the sieve openings and assists particles in passing through. This requires both rotary and vertical motion.

This process seems simple enough, but let's not be taken in.

Historically, sieve shakers have been very, very loud. Even with ear protection, workers do not want to be in the same room while one of these shakers is performing a sieve test.

How Did This Happen?

Prior to standardization, each lab did sieve tests their own way. Angry disputes erupted between suppliers and their customers about whose method of particle size determination was most accurate. In 1935, a group of engineers and laboratory researchers collaborated on how to standardize a sieve test.

The result was ASTM E-11, which standardized how sieves were manufactured and tested. Here is

a summary of the test procedure stated in ASTM E-11.

In other words, rotate the sieve while tapping it. The process requires a certain level of coordination and patience. This is especially true when one considers performing the process for four or five sieve sizes stacked together.

This method was an improvement over the various processes used before ASTM E-11. Due to the patience and dexterity needed to perform the procedure, there were still wide variations from test to test.

About that time, W.S. Tyler Industries developed a mechanical device called the RoTap® Sieve Shaker, which reproduced the ASTM-11 Rotational motion while Tapping the sieves with a hammer-like device.

This innovation ushered in many standards related to the oscillation rate and the number of taps per minute. Thus, RoTap® rotation and taps became a de facto standard in many industries. Test procedures and results were compared to this official and/or acknowledged standard.

In meeting ASTM requirements, however, the sieve shaker was like a whirling

dervish that made ear-splitting bangs and crashes every second or two. It consequently became necessary to leave the lab or build a large sound-proof enclosure. If you have ever used one of these historic machines, you will recall how it would  creep around the room if not bolted down.

Over the years, several sieve shaker designs were offered that reduced the mechanical stresses and significantly dropped the noise level. These designs have had to meet the test of producing equivalent results to the RoTap® based standards.

The new designs included advanced mechanical systems that provided up-and-down motion amplitude control and adjustment. Several techniques of varying the rotational aspect of the sieve shaking process have been employed in these designs.

As material research progressed, new low-density material developed -- the particles of which

tended to swirl above the sieve mesh, rather than becoming exposed to the holes. Some solutions to this problem included periodically letting the particles land on the mesh by interrupting the sieve shaker's vertical motion.

Other products had agglomeration issues, which had to be solved by more violent break-down measures or utilizing wet sieving and shaking techniques. Other new materials require separating smaller and smaller particles, which in turn led to developing equipment that uses ultrasonic sound or vacuum approaches to get the product exposed-to-and-through these smaller sieve openings, at times smaller than 25 microns.

A further and recent complication is the emergence of world-wide quality standards. If a sieving process is used in a system of multi-locations, sieve shakers must be able to duplicate results throughout the system. Similar to matching the results of the oscillating bang-bang machines, these new system sieve shakers must operate quietly and identically regarding how they present the sample to the sieves. This is an additional complication added to on going sieve calibration issues.

It seems like every time I start out to present a simple explanation of something we do, I end up weaving a fabric of complications.

Until the next time I remain as puzzled as always.

P.S. Did you know that you can subscribe to these exposés, rants, raves and ramblings? All you have to do is jot your email address in the box just to the right of the title. 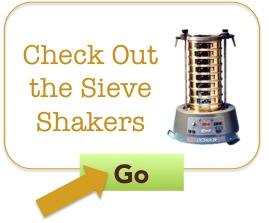