Who Cares About Sieve Testing ?

In one of my more contemplative moments, I thought a bit of history about particle size analysis would be of interest. So let’s see Who Cares About Sieve Testing.

What is Sieve testing?

Sieving in its most elemental definition is the separation of fine material from coarse material by means of a meshed or perforated surface. The technique was in use as far back as the early Egyptian days as a way to size grains. These early sieves were made of woven reeds and grasses. Even today sieving is the most used technique for analyzing particle size.

Until the mid-1930 every lab that did sieve tests used its own individual unique procedures. Big problems were happening between suppliers and customers. Angry disputes flared up about who was right on issues of particle size.

In 1935 a group of engineers and lab people got together to figure out how to standardize a sieve test. The result of this collaboration was ASTM E-11– a standard that told how to make a sieve and how to do a sieve test. Here is a summary of the sieve test procedure stated in ASTM E-11.

In other words, Rotate the sieve while Tapping it. This was an improvement over the random processes used before ASTM E-11.

The process takes a high level of coordination and patience. Even more so when you think about doing the process for four or five sieves at a time. Because of the patience and dexterity needed to do the process, there were still wide variations from test to test. There were still many disputes between material suppliers and their customers.

An enterprising company developed a mechanical machine called the RoTap® Sieve Shaker. The RoTap® reproduced the ASTM-11 Rotational motion while Taping the sieves with a hammer-like device.

This brought about many standards but with it came ear-shattering noise. For decades the standard practice when conducting a sieve test was to leave the lab or build a large soundproof enclosure. Even with earplugs, the intensity of sound is unbearable.

Solutions included more expensive sound enclosures, improved ear protection devices, and procedures that called for leaving the room. Then there were new shakers that reproduced RoTap test results without the noise.

We came on the sieve shaker scene at this point. Our range of shaker products is on our Web site.

Hope that this was an interesting bit of obscure history about a process that is widely used to produce many of the products you use today such as fiberboard, cosmetics, soap powder, cement, and the list goes on.

I hope this has been useful and entertaining.

Let me know if there are any particle size test issues you would like to hear about.

P.S. Did you know that you can subscribe to these exposés, rants, raves, and ramblings? All you have to do is enter your email address into the box just to the right of the title. 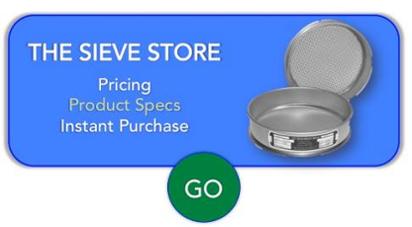