Surface Tension by duNouy Rings or Wilhelmy Plates – Which to Choose?

When tempted to think I know all there is about surface tension measurement, further information brings me back to earth. I’m conversant with the principal applications: surfactant analysis, plating, detecting contaminants, development of ink and the like. I have assisted customers to set up and calibrate duNouy Ring tensiometers for most applications -- all the while taking for granted that the Ring technique was the method of choice -- with only infrequent questions arising about Wilhelmy Plate tensiometers.

My lack of concern had a least some justification. The duNouy method has been around for more than 50 years -- twice as long as the Wilhelmy -- and is the most widely used technique. Several ASTM standards call for it.

There are more Ring-style instruments used worldwide than any other type.

CSC Scientific is readying plans to introduce an automatic tensiometer, the manufacturer of which is a strong proponent of the Wilhelmy Plate method. Prudence therefore dictates gaining an education on this technique -- which I'm sharing with you here.

The two tensiometer methods differ in that the duNouy Ring is pulled though the surface to make the measurement, while the Wilhelmy Plate is stationary.

Using the Ring technique, causes a non-equilibrium state in the liquid as the ring is pulled through the surface.

Wilhelmy Plate, by contrast, is placed at the liquid’s surface and a meniscus is formed on its perimeter, causing a downward pull. The Plate is not in motion thus the entire surface is in equilibrium. The force is constant or varies only with a change in surface tension.

There are other noteworthy differences regarding applicability of these tensiometer methods.

Measuring surface tension variations over time (such as measuring time and end-point surface tension for formation of Critical Micelle Concentration of a surfactant) can be made with the Wilhelmy Plate, but not the duNouy Ring. Because high-viscosity liquids cause greater stress on the somewhat fragile ring, the Wilhelmy technique is preferred for these applications.

The Ring method is easier to use on a manual instrument. Although it tends to yield higher surface tension readings, there is a significant body of historical data for the duNouy technique.

Automatic tensiometer evolution has made

Wilhelmy Plate use easy. These instruments also adapt to the duNouy technique. The automated techniques permit the easy evaluation of the two methods on the same sample, facilitating comparisons of test resuls.

Watch for the announcement of the New Automatic Tensiometer.

Hopefully this short story about duNouy Rings and Wilhelmy Plates has been somewhat informative and helpful.

Until the next time.

P.P.S. Did you know that you can subscribe to these exposés, rants, raves and ramblings? All you have to do is enter your email address into the box just to the right of the title.

Now get both Dunouy Ring and Whilemy Plate  in one CSC Instrument. 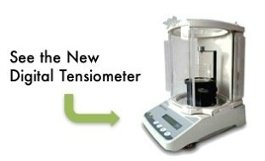