I am going to explore the pros and cons of the Peltier plate vs. the water bath for controlling the temperature of your product.

The water bath creates controlled temperature environments. Temperature control of samples is critical in many viscosity testing applications. For these viscosity measurements, the sample, the sample container and the measuring spindles are immersed the bath. The test is started when the sample elements

reach temperature equilibrium with the water.

Until the ascent of Peltier plates, traditional water baths were the option of choice for temperature controlled viscosity tests. Peltier system developments led to simpler solutions and provided comparable accuracy and temperature stability.

This sandwich of semiconductors between two layers of thermo-conductive ceramic is known as a Peltier Plate. When subjected to a DC voltage a current flows and one side will produce heat and the other side will cool.

If the direction of the current is reversed the cool side will radiate heat. The original warm side will become cool.

What is the Peltier Effect?

The Peltier thermoelectric effect produces heating and cooling at the junction of two dissimilar semiconductor materials as a reaction to the application of a DC voltage between them.

To control the heating or cooling, a DC voltage is applied across the connectors. Heat is generated or absorbed depending on the polarity of the DC voltage.

When compared to water baths and refrigerated circulating baths, Peltier systems have some significant advantages.

Peltier elements have no moving parts, which simplifies maintenance. These plates can produce lower than ambient temperatures without the need for separate cooling systems. Refrigerants are no longer a requirement.

Because of their small physical size, temperature control can be incorporated into individual equipment packages.

Peltier plates can be affected by thermal shock, which can happen with the recycling of the temperature from high to low. This is most often a problem when the cycle rate is very high and the temperature differential is large.

Why choose the Peltier plate or the water bath?

Peltier plates are finding a growing use in laboratory equipment. This is particularly evident with the applications requiring temperatures below ambient. In particular, Lamy Rheology has introduced Peltier self-contained temperature controllers for rotational viscosity tests. (Temperature range)

The utilization of the Peltier effect is growing in laboratory instruments. It’s now finding a place as in-box temperature control devices in rotational  viscometers. Peltier plates can effect a wide temperature range. At temperatures below ambient, Peltier-based instruments do not require refrigeration systems, greatly simplifying the device.

Please share this review with associates who have sample control issues. 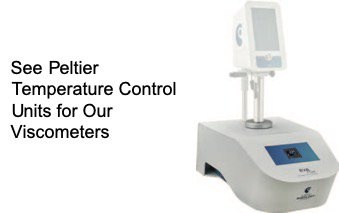