How Does Surface Tension Relate to Viscosity?

You may recall that I promised to offer my interpretation as to how Surface Tension is related to Viscosity.

To begin with, liquid surface tension and viscosity share a common trait: they both involve properties of fluids. After that, things start to get murky.

Let us start with surface tension. This relates

to the property of a liquid’s surface that resists force; it serves as a barrier to foreign materials as well as keeping the liquid together. This ever-present property is caused by unbalanced forces on surface molecules that pull toward the main part of the liquid.

Viscosity, on the other hand, is related to

a liquid’s resistance to being deformed or moved. This is caused by the friction between molecules.

Compared to viscosity, surface tension is a simpler phenomenon. It is basically stable, changed mostly by temperature and chemicals that modify the bonding characteristics of the molecules. As temperature decreases, surface tension increases. The effects of adding an unrelated substance is illustrated by the example of putting soap (a surfactant) in water to reduce the surface tension, which allows the dirt on your hands to more easily mix with the water.

However, non-Newtonian fluids follow different sets of rules. Shear-thinning fluids decrease in viscosity as the

pressure or force increases. Thixotropic fluids change viscosity over time -- Example gels and colloids, and yes ketchup are stable at rest, but become fluid when agitated.

Thus we see that finding the true value of viscosity [which some of us may think of as simply thickness] is a complex process. Viscosity, unlike

surface tension [which tends to be a static phenomenon], is all about movement. All that should concern us in regard to measuring surface tension is whether to use a Wilhelmy Plate or a duNouy Ring. (That is enough to keep me entertained.)

simple comparison. The answer, however, is clear: no correlation. The reasons are not so simple. I guess a good summary would be that surface tension is about steady state and viscosity is about movement.

Until next time, I remain as confused as ever. 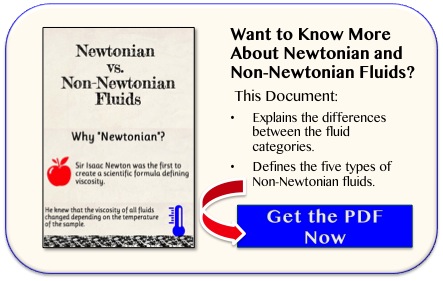 P.S. Did you know that you can subscribe to these exposés, rants, raves and ramblings? All you have to do is click on the RSS Feed symbol at the upper left and you will get a notice when a new one is published. Or, if you prefer, you can also subscribe for e-mail notice by jotting your address in the box just to the right of the title.