What do an Irish music technology developer, a British manufacturer of arcade and retro-style furniture, and a dance bar in San Francisco have in common? Given a million guesses, I’d never have thought of this:

Of course, when I say “surface tension”, I don’t mean the phenomenon caused by cohesive forces on the molecules at the surface of a liquid that allow the surface to resist external force. It’s strange enough that all of those business owners thought that “Surface Tension” sounded like a compelling and relevant name for their companies. (Maybe they’re all science geeks at heart?) 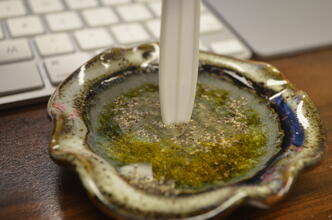 I think it’s safe to say that most people don’t think of dance bars or arcade-style furniture when they think of the term “surface tension."

Much more likely, they’re thinking of the grade school science experiment they or their kids did involving a bowl of water, pepper flakes, and some soap. In this experiment, if you shake some black pepper onto a bowl of water and stick your finger into the water, the pepper will contract toward your finger and you’ll get it covered in little black flakes.

But, rub your finger with a bar of soap (after you’ve cleaned the pepper flakes off, of course) and stick it back in the water, and you’ll find that the pepper now moves away from your finger.

Why does this happen? Well, soap is a surfactant – a compound that lowers the surface tension of a liquid. When your soap-free finger entered the water, the pepper gravitated toward it because the molecules at the water’s surface were contracting to resist the external force your finger was making on the water. Adding soap to the mix lowered the surface tension of the water, so that the force of your finger displaced the water molecules outward.

That’s why we use soap to help us get things clean – if we didn’t, it would be harder to get the water molecules to spread out and into other things. The force on the surface of the water would keep it more contained and make it harder to be absorbed into another product. 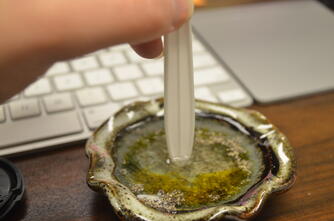 I must admit that when I tried this experiment myself at my desk, I couldn't get it to work by using my finger. Apparently, I've got too much residual soap on my hands (that's a worry for another day). However, when I used a clean plastic knife instead, it worked like a charm.

I can't say the pepper flakes were really drawn in towards the clean knife in the first part of the experiment - they mostly stayed put, with a few kernals moving toward the knife - but when I coated the knife tip in Tide-to-Go (the only soapy thing I had on hand) and dipped it into the water, the pepper flakes shot back away from the knife like they'd seen a ghost. It was actually pretty fun.

Surface Tension may be a cool name for a company, but the scientific phenomenon is even more interesting. The next time you feel like reliving your childhood, instead of heading for a dance bar or buying some retro furniture, try out this experiment. If you want to learn more about surface tension, read our other posts on the topic here.

P.S. Want to get automatic email notifications whenever we publish a new blog post? Subscribe at the top of the page!