Do You Know If Your Test Sieves Are Doing the Job?

Do You Re-Certify? Compare with a Master Stack? Check with Calibration Samples?

What Does Recertification Give?

The ASTM E-11 committee has done a great job of establishing three levels of testing. These levels show the probability of a sieve’s mesh to be within the permissible variations. These variations relate to the size of openings in wire-cloth used for test sieves.

Stated differently, these three levels or categories indicate the probability that a sieve adheres to E-11 standards. The levels are an indication of grade or quality.

Each of the categories provides a statistical assurance that a sieve’s mesh conforms to specified variations:

These categories provide a measure of expectation of how well a sieve conforms to the ASTM standards.

These sieve categories do not change the allowable dimension range of a sieve. These variations can result in significant performance differences from one sieve to another. For example, average allowable variation (AAV) and maximum acceptable opening (MAO) is shown for three sieve sizes.

The certification and recertification process gives an assurance that the mesh in a sieve conforms to ASTM/ISO tolerances. However, this does not deal with the operational performance of a sieve.

Master Stacks Can Be Used to Check Operational Performance.

A master stack is a set of sieves that produces a known result. These sieves are usually specified at a high level of statistical assurance. 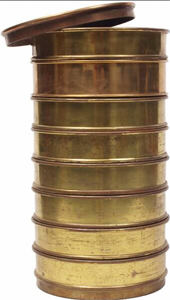 They should be at least Inspection Grade sieves. The master stack provides a baseline to check the performance of working sieves.

Master samples are sometimes used instead of a Master Stack. In theory, this would be the ideal approach. However problems with maintaining master samples limit their use.

Calibration with precision spheres is a superior way to predict and evaluate a sieve's performance.

The process of calibration with spheres is as follows:

The result is provided as a mean mesh opening number. The significance of this is that this gauge is calculated from the actual performance of a sieve. It represents a measure of what you will get in production testing.

This objective measure can be used as a reference to check changes in operating characteristics of working sieves caused by things such as routine wear or cleaning damage. It's a better gauge of performance than recertification.

A typical sieve calibration system is built on the concept of maintaining a record for each sieve. Most sieves have a serial number that serves as the basis of identification.

When a new sieve is received, a calibration is performed. The results are recorded on the sieve record (paper or digital base file). The mean opening result is checked against the acceptable limits. These limits are usually established by quality control or production departments.

sieve’s performance will change due to wear and as a result of damage during cleaning.

A typical system includes a schedule of calibration checks for each sieve. These are based on usage and mesh size. Usually, the smaller sizes are checked more frequently.

In addition, if a stack is not performing as expected, the sieves are checked to find those that are out of tolerance.

This type of calibration system will provide QC data based on performance in the production environment. Recertification of a sieve will not do this.

The ASTM/ISO Certification process provides a basis for assuring that a sieve is of a desired quality level. However, the acceptable range of openings, published in the standard, can be considerable. This variation increases as the mesh opening size decreases.

Comparison of performance to a master sieve stack overcomes this lack of operating data. The downside of the master stack approach is that it is somewhat cumbersome and it is hard to get exact matches when a master sieve needs to be replaced.

The use of calibration beads to asses the operational characteristics of a sieve offers a direct correlation of individual sieves to definitive operational measures - Actual Mean Opening - calculated from the result of a live sieve test.

As an idealist, I favor the calibration or comparative approaches such as master stacks or a calibration bead system, rather than re-certification, to assess a sieve's performance. These direct performance-related approaches have not yet replaced certification as the predominant way of evaluating a sieve.

I hope that this discourse has been useful. Please share it with your colleagues who have sieving as part of their process.

P.S. You can subscribe to our articles and newsletters by placing your email address in the space to the right of the title.